The statement, delivered on 17 June, highlighted the difficulties WFP is facing in providing humanitarian assistance in the war-torn country 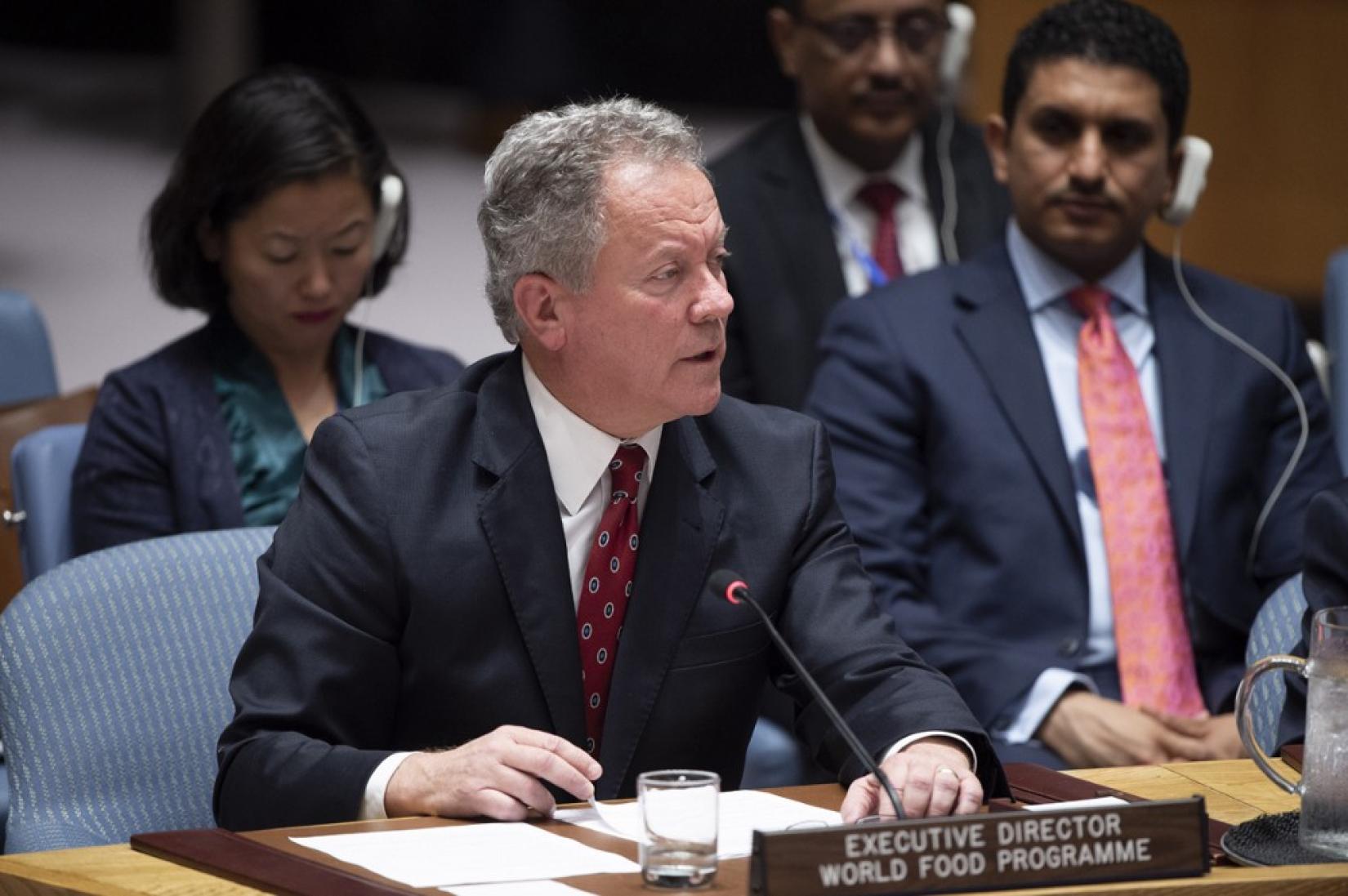 I hope someday I can come here to brief you on some good news … Conflict ending … well-fed and healthy children … Regrettably, today is not that day.

The humanitarian situation in Yemen is dire.

And despite the immense suffering of the 20 million Yemenis who do not have enough to eat, we continue to face fierce resistance to simply just do our job to keep people alive.

You may recall that in November 2017, I spoke out very vocally and critically about the Coalition’s blockade of Hodeida and the lack of humanitarian funds and support of the consequences of war.

And at that time, the Houthis told me how grateful they were that I spoke out. I told them then: this has nothing to do with you.

And I told them: if one day you cross the line, I will speak out as to you, so do what’s right.

Today, I am sad to report that the World Food Programme is being prevented from feeding the hungriest people in Yemen.

Food assistance provided by the United Nations is being diverted in areas controlled by Ansar Allah at the expense of children, women and men.

Let me take a step back here to describe one of our main jobs at WFP. That is, to determine who has the greatest need for our assistance.

No matter where we operate, we must be able to operate independently so that we can identify and verify those who need assistance.

And then we have to put in place monitoring systems to ensure that those people truly get the food they need. That’s another of our obligations.

These systems help ensure that others cannot deprive people of the food they deserve to stay alive, and that our food does not support political agendas.

These systems protect the people we feed.

And they ensure that basic, fundamental humanitarian principles are met and that we are accountable to our donors and to the world.

In the last two years, we have been telling over and over — sort of like Groundhog Day — the Ansar-Allah that we had concerns about their resistance to our neutral, independent operations.

It wasn’t just registration that we were talking about.

We were also having trouble getting equipment imported, getting visas approved for staff, and many other issues.

We kept raising these issues repeatedly! Day in and day out.

In December 2017, we started formal negotiations with Sana’a authorities to allow us to identify the hungriest and put them on a biometric system.

Months and months of talks did not yield any results and while we kept talking, and talking and talking, in late 2018, we uncovered serious evidence that some food was being diverted and going to the wrong people.

As I told the Security Council in November last year, the situation in Yemen was and is catastrophic.

Livelihoods have been destroyed, the economy is in shambles.

We are now assisting, feeding more than 10 million people a month.

But as the Head of the World Food Programme, I cannot assure you that all the assistance is going to those who need it the most.

Because we are not allowed to operate independently.

And because aid is being diverted for profit and or other purposes.

The bottom line is this: food is being taken from the mouths of hungry little girls and little boys who need it just to survive.

Let me cite just a few examples of the many evidences we have gathered:

· In Sana’a city, a number of beneficiaries told us that they had not received any food assistance. But the distribution list contained their thumbprints, as if they had.

o Who took their food?

· We interviewed beneficiaries at seven centres in Sana’a city. As much as 60 percent confirmed that they had not received any assistance.

o Where did their food go?

And while we saw an initial improvement in early 2019, by the hard work of Martin and Mark and Lise Grande and others, concerning information has emerged:

· In Sada’a, 33 percent of the respondents of our survey did not receive food in April 2019.

· And in just the last 60 days, our hotline and monitoring system have detected more than 30 cases of possible misappropriation of food in parts of Yemen controlled by the authorities in Sana’a.

On top of this,

Let me be clear, diversion, while mostly in Ansar-Allah areas is not limited only to Houthi-controlled areas…

But when we face challenges in other areas controlled by the government, we have received cooperation to address the issues, on an ongoing basis.

Mr. President, our food assistance is being manipulated, and we are being blocked from fixing it.

If we do nothing…

· Are we no longer neutral?

Humanity is the reason we are in Yemen in the first place. It is why the world, and many nations represented in this room today, are providing WFP over US $150 million per month to feed hungry Yemenis.

When food assistance goes to the wrong people, when it fails to reach the neediest, have we failed humanity?

We cannot let this stand.

We have tried every possible option to resolve this over the past 18 months.

We have been dialoguing and negotiating with the Ansar-Allah leadership to simply, simply let us do our job and let us reach the most vulnerable people in Yemen. It is not any more complicated than that.

I have personally appealed to Sayeed Abdul Malik al-Houthi, the leader of Ansar-Allah.

In December and January, he responded in a most favourable way and we made some progress.

On December 28th 2018 and January 15th of this year, we signed agreements with the Sana’a authorities on beneficiary registration, beneficiary targeting and biometrics. Tremendous breakthrough.

It seemed like we were able to move forward.

But every time we got close to actually putting those agreements into place, there would be a new roadblock.

After extensive dialogue, again I wrote to the authorities, asking not for words, but action: Honour the agreements you have signed.

If we do not receive these assurances, then we will begin a phased suspension of food assistance, most likely towards the end of this week.

If and when we do initiate suspension, we will continue our nutrition program for malnourished children, pregnant women and new mothers.

And we will also keep pushing and pushing to get an agreement.

Then we can go back to our regular work, what we do all over the world assisting 85–90 million people in the most difficult places on earth.

And can do beneficiary targeting and biometric registration needed, making sure the right beneficiaries receive the support they need.

Then we are looking at expanding the suspension to other areas where the risk of diversion is high.

We don’t want to do this. It goes against every fibre of our being.

Our humanitarian principles — the very tool that allow us to do our job in the most complex places are compromised if we are not allowed to determine independently who needs our help the most.

We have the expertise and fortunately, we have the funds to keep suffering Yemenis alive.

Mr. President, let me be crystal clear here: children are dying right now as we speak because of this interference and our lack of access.

I do believe that there are elements of the Ansar-Allah leadership who want to move forward and who want to do what is right. I really do.

But like in every war, there are those who stand to make a profit and they will do everything to obstruct and delay.

They know that children are dying.

They know that families are suffering because they aren’t getting the food they need.

And no one associated with the United Nations should stand idly by while this happens.

It’s not just about Yemen.

This is about the integrity of the entire United Nations and the humanitarian systems around the world.

That’s what is at stake.

Mr. President, while we are not giving up…and I still have hope…. that we will prevail about what is right, and the Houthi leadership will do what is good, we are not asking the Ansar Allah Movement anything really other than to LET US DO OUR JOB.

Mr. President, let me end with a short story…. I don’t know how many of you, about a year and a half ago, saw “60 Minutes” had a special exposé. It was very tough, on the starving children and this story was implicating all sides of the story. And Scott Pelley, throughout this extensive interview with many people, but with me personally…at the end he was taking the mike off and he looked at me — and I’d known Scott from the past, from politics — and he said, “Governor,” he said, “You’ve got the greatest job on earth, keeping people alive.” And I said, “Scott I do, I really do have the best job on earth, but I want to say something to you that you haven’t thought of and it’s going to bother you.”

I said, “Scott, how would you like that job?” And Scott with just awe, he just looked at me and said “Oh my God, I never thought about that.”

I said, “Scott, unfortunately, I have to think about that every day and every night.”

In Yemen we’re fortunate enough to have the money we need…we just don’t have the access. We don’t make this decision lightly.

I am begging the Houthis and all of those concerned to do all within your power to let us do what we do best: save lives