By the end of August, 100 of the 268 hospitals UNFPA currently supports were closed, and another 75 will be shuttered by the end of this month. 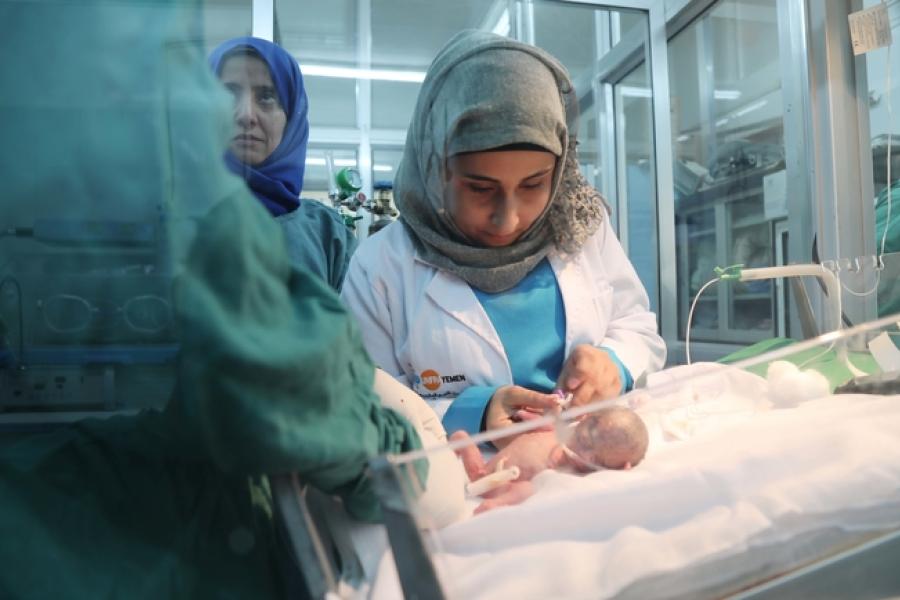 Every two hours, a Yemeni woman dies from complications of pregnancy and childbirth.
Photo | UNFPA Yemen

SANA’A, Yemen – Om Asma’s most recent pregnancy could have killed her. She already had a baby at home, and her body felt depleted. “I became pregnant immediately after the birth of my last child. There was no spacing between the two births,” she explained. “I had severe stress after the last pregnancy, and had problems with the uterus.”

The health facility in her rural area in Al-Baidha was unable to manage her delivery. “When it was time to give birth, my husband and I went to the district clinic, but the clinic was not equipped to handle the birth and my situation started to worsen. The doctor there told me that I needed a Cesarean section with special care, and they do not have the facilities for my treatment.”

She arrived at the Kuwait Hospital in Sana’a, the capital, after many hours of travel. There, she underwent a successful Caesarean section delivery. “They saved me and my child in this hospital,” she said.

Other women may not be so fortunate.

Unless humanitarian funding is urgently released, health facilities will be forced to scale back, or even end, their services.

Om Asma’s physician, Dr. Manal, explained that Kuwait Hospital’s emergency obstetric unit was shuttered due to the country’s conflict and collapsed economy, and was only reopened with funding from UNFPA. UNFPA provided every mother with a package of essential post-partum and newborn care supplies – but this has stopped.

“When we inquired why they stopped provision of the mothers' bag, they told us that this happened because of a funding shortfall this year from donors,” Dr. Manal said.

“At the moment, the only thing we can do for people is to provide basic medical service.”

Donors committed $2.6 billion to United Nations and humanitarian partners during a February pledging event. Less than half has been received.

UNFPA’s procurement of medicines has already stopped due to lack of funds. By the end of August, 100 of the 268 hospitals UNFPA currently supports were closed, and another 75 will be shuttered by the end of this month. The closures will directly affect some 650,000 women accessing reproductive health services, and more than 1 million would be at risk if all facilities close.

"Over 1 million Yemeni women need funds now, or they will lose access to life-saving reproductive health services, putting their lives and those of their babies at risk," said UNFPA Executive Director Dr. Natalia Kanem.

It is estimated that every two hours, a Yemeni woman dies from complications of pregnancy and childbirth, and another 20 suffer preventable injuries, infections or disabilities.

Om Areej escaped this fate when she reached the Kuwait Hospital last month. Like Om Asma, she underwent an emergency Caesarean section.

“Now my child and I are fine,” she said. “They provided me with full service and free medical care such as the operation and medicines. I found real hope here. But I am surprised that some medicines are not free. When I asked the doctor, she told me they wished they could give everything for free, but they do not have enough funding right now.”

Health staff remain determined to help the women and newborns in their charge, but the funding crisis leaves them concerned about the welfare of their colleagues as well as their patients.

"We have problems with support and funding, especially in paying health salaries. The only source of support for emergency obstetric care is  UNFPA. We are afraid that even our current support could be stopped," said Dr. Raja, an obstetrician at the hospital.

“The disaster is worsening day after day”

Services for survivors of violence have also been affected. Fourteen safe spaces and four specialized mental health facilities for women have closed.

“We have done our best to serve the people here, but the disaster is worsening day after day in an unbelievable way,” said Balqees Bukari, the supervisor of a safe space in Al Hudaydah.

Her centre provides training opportunities for women and girls, and psychosocial services for survivors of violence. But she fears for the future. “Because of the current situation and the war that is now taking place in Hodeidah, we are no longer able to absorb more. Thousands of women and girls are in very bad situation now.”

Of UNFPA’s 2019 appeal for the humanitarian response in Yemen totals $110 million, but only $38 million has been received. UNFPA is calling on donors to provide urgent funding to continue and restore life-saving reproductive health care and programmes that prevent and respond to gender-based violence.

Meanwhile, Ms. Bukari says she and her colleagues are doing their best: “We will not stop supporting women and girls. They have no one standing beside them except us.”