Under-Secretary-General for Humanitarian Affairs and Emergency Relief Coordinator, Mark Lowcock, Briefing to the Security Council on the humanitarian situation in Yemen

Thank you very much, Mr. President.

As you’ve heard me say many times before, Yemen is the world’s worst humanitarian crisis and the largest relief operation. More than 250 humanitarian agencies – most of them Yemeni – are working through the UN response plan. Together we are reaching more than 12 million people across the country every month.

But as the aid operation has expanded, the drivers of the crisis have continued to get worse. In fact, it often feels in Yemen that the more we achieve, the bigger and more complicated the problem becomes.

For more than a year, we have advocated progress on five key priorities: 1) the protection of civilians; 2) humanitarian access; 3) funding for the aid operation; 4) support for the economy; and 5) a political solution.

I would like to update you on where these issues now stand.

Let’s start with protection of civilians.

September was the deadliest month for civilians so far this year, with reports of 388 killed or injured due to conflict across the country. That’s an average of 13 people every day. There are many gruesome examples.

Last week, four children in Al Hudaydah were killed when unexploded ordnance from previous rounds of shelling detonated nearby. All four were from the same family.

On 23 and 24 September, air strikes killed 22 civilians in a mosque in Amran and a family home in Al Dhale’e. And in Sa’ada last week, air strikes damaged a UN-supported water system that serves 12,000 people. This was the fourth time this facility has been hit since 2016.

Now as Martin will tell you when he briefs you, the situation on the violence is a bit better.

But with more than 30 active front lines, we can only hope that recent steps towards de-escalation, which Martin will brief you on, will continue. I also continue to call for a nationwide ceasefire. And in parallel to these efforts, all parties must uphold their obligations under international humanitarian law to protect civilians and civilian infrastructure.

Mr. President, the second issue is humanitarian access, which remains extremely challenging – particularly in the north. Agencies there must still navigate more than 100 different restrictions imposed by Ansar Allah authorities, in addition to frequent harassment and attempts at interference.

In September, the Ansar Allah authorities effectively expelled or refused entry to several United Nations personnel, including a senior official. Movement restrictions also remain severe. To cite one example, local authorities recently blocked humanitarian assessments in Hajjah and Hudaydah, where the authorities themselves tell us more than 12,000 families have been affected by floods.

We are engaging with Ansar Allah authorities, underlining our expectation that they will take action to improve the operating environment in accordance with humanitarian principles. We have seen some progress, with dozens of blocked projects recently cleared to start. But many more projects remain pending.

On a separate note, we hope recent discussions with Ansar Allah authorities will finally pave the way for a UN-led assessment of the decaying SAFER oil tanker. This assessment is the first step in preventing a major potential environmental and humanitarian catastrophe in the Red Sea. The United Nations remains eager to assist with the SAFER. It is entirely up to the Ansar Allah authorities whether we are able to do so. We have, of course, been here before.

In the south, we are encouraged by reports that talks between the Government and the Southern Transitional Council are progressing. A renewal of hostilities in the south would put civilians in harm’s way and impact humanitarian operations. Last month, several humanitarian organizations suspended activities in parts of Abyan and Shabwah as a result of clashes there. These programmes have now mostly resumed but continue to face difficulties near front lines.

The Government has made substantial progress in clearing backlogs of pending humanitarian projects, with many recently approved to begin. But several other projects are still awaiting Government clearance, which is delaying assistance.

Mr. President, the third point is funding for the aid operation. For much of the year, agencies struggled to raise enough money. Over the last few months, funding gaps forced key programmes to close.

So I welcome the generous contributions we have received in the past several weeks. At the General Assembly last month, the Kingdom of Saudi Arabia gave the United Nations $500 million for the response plan, bringing their total contributions to this year’s plan to $708 million.

Earlier in September, the United Arab Emirates allocated $200 million to my office and the World Food Programme, bringing their total to $380 million.

Other donors have also stepped forward. Kuwait has just given $88 million to agencies in the plan. In the last two months, the United States, Germany, the European Commission and others have also given substantial additional funds on top of their earlier contributions.

With hundreds of millions in new funding over the last six weeks, the response plan has gone from 45 per cent funded in early September to 65 per cent funded today. Although substantial gaps remain, UN agencies have re-opened many programmes that had been suspended, including support for health facilities, malnutrition treatment centres and vaccination campaigns. Others should come back online soon.

Mr. President, the fourth point is the economy. Last year, economic collapse pushed Yemen to the brink of widespread famine. So we should all be concerned that indicators are again pointing in this direction.

The exchange rate is fluctuating between 580 and 595 rial to the dollar – more than double the rate when conflict escalated five years ago. Because Yemen imports almost everything, consumer prices have also more than doubled, pushing basic goods out of reach for millions of people. So although there may be food in the markets, fewer people can afford it.

Now, 580 rial to the dollar is an improvement over the sustained 600-rial rate we had seen for the last six weeks. And I want to commend the Government for their efforts to stabilize the exchange rate, and to pay more civil servant salaries and strengthen the economy.

But ultimately those efforts cannot manoeuvre around a fundamental obstacle: the lack of foreign exchange. So, I call on Yemen’s partners to provide regular injections of foreign exchange at a scale that will keep the exchange rate stable and help return food and other commodity prices to more affordable levels.

I also want to repeat my concern over the humanitarian impact of recent Government regulations on commercial fuel imports, which have contributed to severe fuel shortages in many areas. Fuel is essential to transport food to markets, pump drinking water and power sanitation systems. Nearly three-quarters of hospitals rely on fuel to provide care, and aid organizations need fuel for their work.

Over the last several weeks, these regulations imposed by the Government, blocked commercial fuel imports from Hudaydah. Yesterday, however, we understand that the Government cleared eight vessels carrying the equivalent of more than a month of average fuel imports. Several have already started sailing for Hudaydah, and one arrived this morning. This is something I welcome. It’s important to understand the central role of fuel in determining humanitarian needs in Yemen and our ability to meet them. As severe shortages gripped many areas in recent weeks, fuel prices doubled or even tripled. Very quickly, this pushed the cost of food and drinking water – which many people already could not afford – even higher.

Without fuel, municipal water systems in three cities simply stopped working altogether, and others cut back services. Sanitation plants reduced operations. Large quantities of human, animal and commercial waste accumulated in the streets, greatly exacerbating the risk of cholera and other diseases.

Rising fuel prices also mean families are less likely to get help when they need it, because transport becomes too unaffordable or unavailable. In some areas, the number of people reporting to health facilities over the last several weeks dropped by 50 per cent because people could not reach them. At the same time, mobile health teams struggle to reach patients where they are, as the teams don’t have enough fuel.

So, again, I welcome this step towards greater flexibility, and I call on the Government to manage commercial imports in a sustainable way that does not exacerbate humanitarian needs. I also call on Ansar Allah to avoid any steps that may worsen shortages or push price rises higher. Everything possible has to be done to ensure that families are able to buy what they need to survive, and essential services can continue.

Mr. President, the funding we’ve recently received for the response plan will allow humanitarian agencies to continue keeping millions of people alive. This is cause for optimism. But there is much more to do if our aim is not just to reduce people’s suffering, but to end it altogether. The only way to achieve that is to stop the war. And I’m sure that that is what Martin is going to address now. 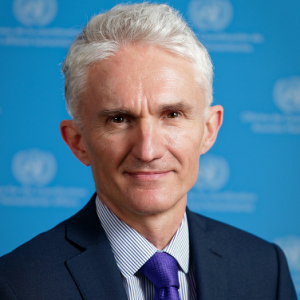