I am honoured and pleased to chair this conference and to welcome all of you today to Geneva. And if you don’t mind I will give the floor to myself for an opening statement.

I am indeed pleased to be here with you today to demonstrate our common commitment to the suffering people of Yemen.

And I want to thank the Governments of Sweden and Switzerland for co-hosting this conference for the third year running, and for your continued solidarity and support.

A third pledging conference can never be a good thing. We all wish we did not need to be here. Yemen remains the world’s worst humanitarian crisis.

As the conflict continues, 24 million people - 80 per cent of the population - need humanitarian aid and protection.

And with continued fighting and a collapsing economy, an additional two million people fell into humanitarian crisis in the past year.

Two million girls, boys, women and men in need of lifesaving aid would be a significant emergency on its own. But in Yemen, it is a small fraction of an overwhelming humanitarian calamity.

Tens of thousands of people have been killed or injured since the conflict escalated, many of them civilians, and many more have died from preventable diseases, exacerbated by malnutrition.

Twenty million people cannot reliably feed themselves or their families. And almost 10 million are just one step away from famine.

Children did not start the war in Yemen, but they are paying the highest price. Some 360,000 children are suffering from severe acute malnutrition, fighting for their lives every day. And one credible report put the number of children under 5 who have died of starvation at more than 80,000.

Continued conflict in towns and cities has significantly increased the number of people forced from their homes, up to 3.3 million, from 2.2 last year.

Over half of all health facilities are out of action, and nearly 20 million people lack access to adequate health care.

In 2017, the worst cholera epidemic in history reached unprecedented levels as water supplies and sanitation and public health services collapsed. Humanitarian agencies on the ground, working with public institutions, have greatly reduced the spread of cholera. But the threat remains, because almost 18 million Yemenis still do not have adequate access to safe drinking water or sanitation.

Two million children in Yemen are out of school, and 2,000 schools have been directly affected by the conflict: damaged, destroyed, converted to shelter for the displaced or occupied by armed groups. And half of the teachers in Yemen have not been paid in over two years, even if we are now witnessing the big efforts of the Yemeni Government to increase payment of salaries across the country.

And as in all humanitarian emergencies, women and girls are suffering a crisis within a crisis. They are at increased risk of sexual and gender-based violence, and of child marriage. More than two-thirds of Yemeni girls are married before they turn 18, up from 50 percent before the conflict started.

We are here to respond to a crisis of devastating proportions.
But we know that there are no humanitarian solutions to humanitarian problems.

So, I would also like to welcome the progress that has been made on ending the conflict that is the root cause of this unprecedented suffering.

While there is still a long way to go, many obstacles to overcome, there are some signs of hope.

The UN-brokered Stockholm Agreement reached in December 2018 and Security Council resolution 2451 endorsing that agreement, led to a ceasefire in Hudaydah that with all the problems we know continues basically to hold.

The parties have expressed their commitment to moving forward with implementing other elements of the agreement, concerning the ports of Saleef and Ras Isa, and an executive mechanism for exchanging prisoners.

And the newly-established United Nations Mission to support the Hudaydah Agreement is working closely with the parties to achieve progress towards the redeployment of forces and the opening of humanitarian corridors. And I thank Special Envoy Martin Griffiths for his efforts.

I urge the parties to continue their negotiations and to choose the path to lasting peace.

The unity of purpose of the international community and the strong backing that Member States have provided to the political process have been, and will continue to be, essential.

But even as we inch towards peace, and as I said, there is a long way to go, humanitarian action must further increase this year.

The 2019 Humanitarian Response Plan for Yemen requires $4 billion to reach 15 million people across the country.

And more than half of the funding will go towards increasing those reached with emergency food aid to 12 million people every month.

In December, thanks to the generosity of donors, the UN and our partners on the ground increased the number of people reached from 8 million to more than 10 million. But we must do more.

Last year, we have raised $2.6 billion, or 83 per cent of what was required. Over the course of the year, over 200 aid agencies reached people across all of Yemen’s 333 governorates.

I thank donors for the generous funding you have already pledged or committed for 2019 ahead of today’s event.

Today’s pledges will help humanitarians across Yemen reach even more women, men and children who are in dire need.

The majority of humanitarian aid workers in Yemen are Yemenis helping their fellow countrymen and women, and I thank them for their service.

For many years, Yemen hosted hundreds of thousands of refugees and people in transit.

As High Commissioner for Refugees, I witnessed for myself Yemenis’ legendary hospitality and kindness to the people in need.

I was always extremely impressed with the generosity of the Yemeni people. Somalis, a few years ago, were arriving in large numbers to the coast of Yemen, and they were all granted prima facie refugee status, when we saw so many other borders being closed. And Yemenis have shared with the Somalis their very meagre resources, integrating them not only in camps –  the overwhelming majority was in cities and benefiting from the solidarity of the Yemeni people.

I think that this extreme generosity of Yemenis needs to be corresponded to the generosity of the international community to support a people that deserves – that fully deserves – our full solidarity and commitment.

And I have no doubt that Yemen will stand on its feet again and play its full role in the international community.

Until then, I stand in solidarity with millions of suffering Yemenis.  And the United Nations and the wider international community are with you every step of the way.

Together, inshallah, we can bring the suffering in Yemen to an end. 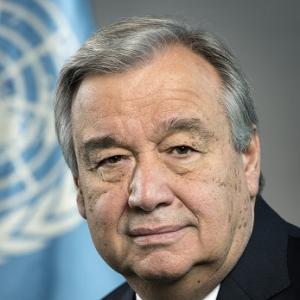