Throughout this year, the World Food Programme (WFP) has increased assistance to all famine risk areas in Yemen.

Throughout this year, the World Food Programme (WFP) has increased assistance to all famine risk areas in Yemen, but as the economy keeps deteriorating, families are struggling to survive even with food assistance.

In Maghrabah, a remote district in Hajjah governorate in northern Yemen, families are resorting to eating the waxy leaves of a local tree to survive, boiling them to soften them into a bitter-tasting paste that is slightly more digestible. Maghrabah is one of 11 districts in Yemen where famine-like conditions were identified in late 2020.

"Sometimes I feel like I'm going to die without food. Sometimes we get a little food from the neighbours, but there are nights when we starve. All of us," said Abdullatif. “When this happens, we have to eat leaves. The tree grows in our village and many of the people here eat the leaves due to a lack of food.”

Abdullatif and his wife have five children. The family receives monthly food assistance from the World Food Programme (WFP) – a food basket of staples including flour, pulses, oil, sugar and salt. That is the only food they have – and when it runs out the family gathers leaves from the ‘halas’ tree to eat. Villagers used to eat the leaves only occasionally, but now this plant has become a regular meal.

Abdullatif’s remote village has been further isolated by fuel shortages. Fuel imports into Yemen are down 73 percent year on year, pushing prices up and creating a thriving black market. Few in Adbullatif’s village can now afford public transport, making travelling for medical care - or even to market to buy food - almost impossible.

Young father Essam, 25, knows this too well. He sold his family’s two cooking gas cylinders to pay for transport from Hajjah to Sana’a city to get treatment for his malnourished son, Fouad. Three-month-old Fouad weighed just 3.2 kg – about half the average weight for a baby his age – when he was admitted to hospital.

“It doesn’t matter what I sell. I wanted to save my son’s life,” Essam told WFP.

Even for families who have access to markets, soaring food prices have left millions in Yemen struggling to afford enough food to get them through the day. The cost of a minimum food basket has risen by well over 40 percent since the start of the year in some southern governorates, including Abyan (60 percent), Ma’rib (55 percent), Hadramawt (50 percent), Aden (46 percent) and Ad Dali (46 percent). In the north, prices have risen over 25 percent in many areas.

While Yemen’s crisis is complex, the effect of years of war on families like Abdullatif’s is clear.

“A young man like me should live better, in a better condition. I don’t care about my future now. What I care about now is how I can feed my kids,” said Abdullatif.

Abdullatif’s two youngest children – one-year-old Jalal and Jalilah, 4 months – are showing signs of acute malnutrition. Their hair is turning blonde, a sign of serious nutrient deficiency. They are just two of the 2.3 million Yemeni children under 5 at risk of malnutrition this year.

But despite the warning signs, Abdullatif says he cannot afford to take them to a nutrition clinic – the cost of transport is too high for him.

With the drivers of Yemen’s crisis showing no signs of abating, hunger is rising. Inadequate food consumption, one measure of hunger tracked by WFP, is increasing largely due to the economic downturn -- 45 percent of people in the south and 37 percent in the north do not eat enough food,

This is pushing families to resort to desperate measures like eating leaves to survive.

Recent history shows that support for frontline humanitarian agencies like WFP makes a difference in Yemen. A famine was averted in 2019 as donors stepped up allowing WFP to scale up food assistance by 50 percent. This worked in tandem with a US$2 billion deposit into Yemen’s Central Bank by the Kingdom of Saudi Arabia that facilitated food imports and supported the recovery of the exchange rate, bringing the price of food down.

However, WFP will start running out of food from October. Food assistance is also only one part of what so many families in Yemen need. Other programmes like health, protection, education and water, sanitation and hygiene (WASH) services are also facing cuts.

As world leaders gather for the United Nations General Assembly this week, WFP urges them to remember that the level of need in Yemen will continue to grow unless action is taken to make food and fuel more accessible and affordable. Action taken today will save lives and lay the foundations for peace.

Until peace comes to Yemen, the fear of hunger will continue to stalk families.

“Hunger does not show mercy to anyone. If it comes, it will kill you and your children. That is how I always imagine it: as a killer. Like a ghost,” said Abdullatif. “I fear for my children." 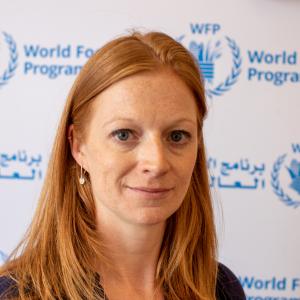