The statement, delivered on 18 July, highlighted the difficulties WFP is facing in providing humanitarian assistance in the war-torn country. 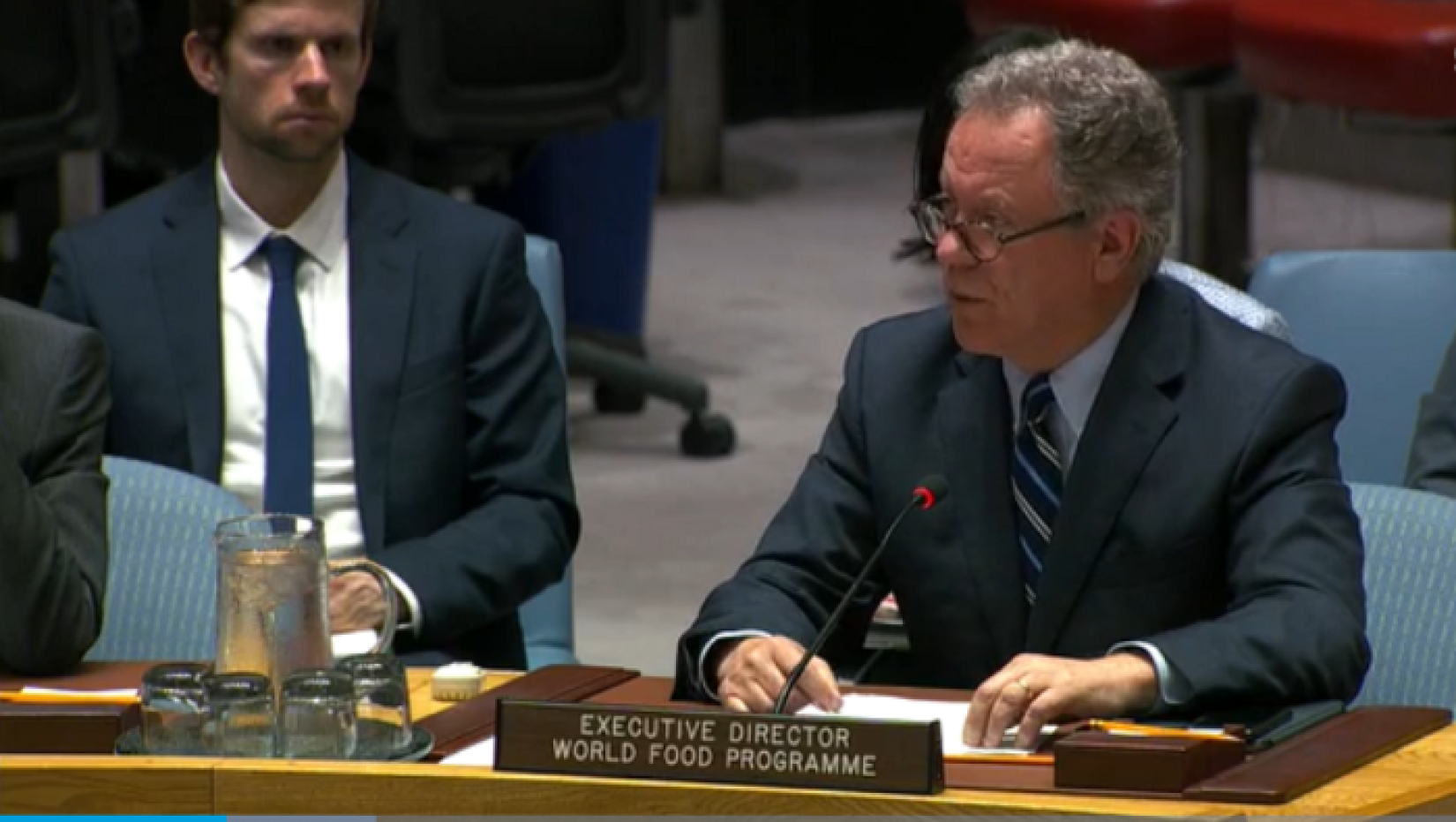 Mr. President, thank you very much and thank you for the opportunity to brief the Security Council today on the situation in Yemen.

I want to thank my colleagues Mark and Martin for all their hard work and their updates.

When I briefed this council just about four weeks ago, I said that the World Food Programme was being prevented from feeding the hungriest people in Yemen.

We were being prevented from operating independently, as we must, and that much-needed food was not in fact reaching the people that needed help.

I ended my briefing by begging the Ansar-Allah leadership — in front of the world — to just let WFP do what it does best: save lives. It’s just that simple.

Because of the access challenges, food being diverted away from intended beneficiaries, and lack of accountability — and all the issues I outlined last month, WFP made the difficult decision to begin a phased suspension of assistance in Yemen in late June.

The suspension started in Sana’a, and affected 850,000 men, women, girls and boys.

As a father, you can imagine how difficult a decision like this is.

Not a day has gone by where I have not thought of the impact that suspending food assistance may have.

To the people in Sana’a City, and through all of Yemen, I am sorry you’re having to go through this.

But let me add — despite the suspension — we have increased, as Mark said, the number of people who have been reached, from 10.6 million to 11.3 million, and we are continuing to scale up. In fact, we expect to reach over 12 million by the end of this month.

Following the suspension, we have expanded our nutrition programmes as well inside the City of Sana’a, where the suspension is in place, to ensure that the most vulnerable children, pregnant women and nursing mothers have the food that they need to survive.

I want to make it very, very, clear to everyone.

The responsibility to stop malnutrition and hunger lies first and foremost with those who are at war.

It’s not WFP, not any of our partners, and not the United Nations.

We are only in Yemen for the sake of humanity …

To offer our assistance when warring parties cannot or will not fulfil their responsibilities.

No one would be happier than all of us at the World Food Programme when we’re not needed because there’s no hunger.

But until that time:

· And uphold the obligations under International Humanitarian Law … Law that specifically protects neutral, impartial and independent humanitarian action, including the delivery of essential items, including food.

Despite all of the difficulties I outlined last month, we have continued to engage in good faith.

For the sake of those who need our help the most in Yemen, we kept the lines of communication open.

We have offered dialogue at every level.

We have had dozens upon dozens of meetings and engagements with the Ansar-Allah authorities.

We have listened and heard their concerns.

We have worked tirelessly to find solutions to accommodate concerns that were raised and put forward workable proposals.

This kind of work, as you well know, is not always so easy.

But it is worth it.

Mr. President, while we have yet to sign an agreement, I must say that we have made substantial progress in the discussions.

In fact, I want to read this one text and make sure we didn’t get a signed agreement in the last few minutes.

But the bottom line I’ve just received is — because we’ve been negotiating all night long — and as of this moment, we have an agreement in principle but it’s not a signed agreement as of yet. But a lot of progress has made been made in this regard.

But we’ve got to find a final solution. And so, I believe we’ll get there, I’m hopeful we’ll get there. And as I’ve said just now — I’ve just been assured by this last-minute text, as they’re meeting as we speak, I was hoping we’d have a signature before I got to this point in my talk but we have not reached that signature. So the door is still open.

Once this is resolved, we are ready to begin implementing this agreement immediately. We will have food back on the streets in Sana’a in just a matter of days.

This is what the people of Yemen deserve and demand of us.

Now while this agreement will help ensure the right people get the food, it would also allow the accountability framework required to start cash programmes.

Cash will help stimulate the local economy and help stabilize the Riyal, which will have a multiplier effect — bringing benefits to everyone in Yemen, not just the 12 million that we are providing assistance on a daily basis.

That means 18 million other people who now get their food through the market …the Riyal will stabilize and it will help mothers provide more food for the children which will help us in so many ways, as Mark has alluded to.

But let me be very, very clear — if we don’t reach an agreement, or an agreement is reached and progress is not made on implementation — because we have been at this point before — we will find ourselves in the same position we are in today, but probably worse.

But let us hope and let us pray that everyone, on all sides, will do what is good for the people of Yemen. We will keep you informed.

The suspension has been the headline story from Yemen over the past month.

But the real story has been — and should continue to be — the humanitarian catastrophe that continues to unfold in Yemen.

Lives are lost, livelihoods are gone, and for far too many, the hope for a better future grows more dim every day.

Around 30 million people live in Yemen, and more than two-thirds of them are food-insecure.

Ten million of them are severely food-insecure — they don’t know where their next meal will come from as they march towards starvation.

Every day, Yemenis are making impossible choices, just to survive.

This is the toll that conflict, that war, collects.

And even in the most difficult circumstances, WFP continues to save lives working with our other humanitarian partners.

And I have said before, we have scaled up our operations and even in spite of the suspension we have been able to increase the number of beneficiaries to over 11 million and hopefully 12 million by the end of this month. We hope to continue to provide assistance.

In December, we learned that 250,000 people in Yemen were facing catastrophic food security conditions.

That is as bad as it can get.

We tripled food assistance in those hardest-hit districts.

And it did the job. In 29 of 45 districts that we were able to collect data in– we can now confirm that none are in the catastrophic phase anymore.

That’s just one of the success stories as many others, so I want to thank you, those of you who have been extremely generous, like the United States, UAE, KSA, UK and others who’ve been very generous in allowing us to achieve these objectives.

Let me give you another success story, because there are so many bad stories.

We know that the school system has all but collapsed because of the war, but we are doing our part to ensure that the children still receive an education. In fact this year alone we were able to provide nutrition in schools to nearly 700,000 children.

Those are meals that give Moms and Dads a little extra comfort, knowing their children will get fed in addition to what we’re able to provide them at home.

This keeps the kids in school, and it’s an investment in the future of Yemen.

At some point, when the guns go silent, and Yemen rebuilds, it’s these little boys and these little girls who will turn Yemen into the country it deserves to be.

We are grateful to all of you for all the support of donors, many of who are around this table today, whose generosity enable us to do what we do.

Donors, though, have to be even more generous, because we need more help and there are many of our humanitarian partners that aren’t getting the assistance that we need.

To keep reaching the most vulnerable, we need (US) $1.2 billion over the next months.

We are only 43 percent funded at the moment.

WFP has a critical role to play in the humanitarian response, but if our partners do not have the support they need, it does not matter how much food we deliver — lives will be lost.

I have a few requests today, on behalf of the teachers, the doctors and nurses, the mothers, the fathers…

And last but not least, the little girls and little boys who just want to eat and play and learn.

Continue to be generous with your contributions. And for those who have made pledges — make good on them.

But I must say, we are reaching the point where no amount of money in the world will truly alleviate the suffering of the Yemeni people.

The people in Yemen, the people at WFP, and our partners, we do a heroic job, working hard, day and night, putting lives at stake to make success stories and keep people alive.

But when war destroys everything — lives, livelihoods, economies — there’s only so much we can do.

We are fast approaching those limits.

Please, for the Yemeni people …

Stop this war, find peaceful ways to settle your differences. End the suffering.

We cannot give up. We owe the people of Yemen nothing less.